If you thought that all there was to Tajik literature was the famous Persian poet Rudaki, perhaps you might want to visit the Wall of Great Tajik Writers. 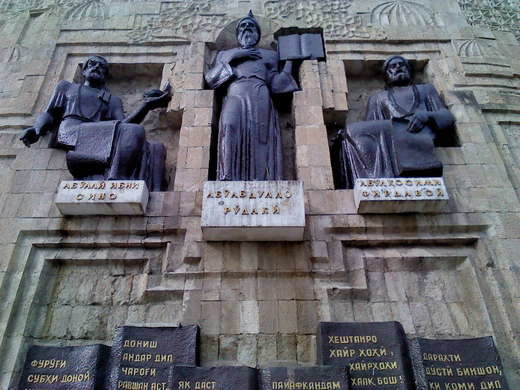 The “Wall” is the facade of the Writers’ Union building in Dushanbe, home to an association of novelists, poets, playwrights, and other writers. The large wall is carved with nine niches containing eleven life-size statues of famous Tajik writers, a tribute to Tajikistan’s Persian and Soviet history.

The 8th-century “Adam of Poets,” Rudaki, justifiably takes the centre stage. He is considered a father of classical Persian literature, though sadly only a small portion of his work has survived the test of time. Other notable writers on the wall include poet Ferdowsi (940-1020); poet, mathematician and astronomer Omar Khayyam (1048-1131); writer and intellectual Sadriddin Ayni (1878-1954); and poet Mirzo Tursunzoda (1911-1977). In the garden next to the building is a large statue of Ayni and famous Soviet writer Maxim Gorky sitting around a table, absorbed in conversation.

The Writers’ Union building was designed by renowned architect E. Salikhov and constructed in the early 1980s. The structure immediately became an exemplary manifestation of Soviet Modernist architecture, a trend that incorporated local sensibilities within the Soviet architectural tradition, which emphasized social purposefulness, grandiosity (regarding size), and frugality (regarding construction materials). All these features are clearly seen in Salikhov’s creation in Dushanbe.

The Writers’ Union dates back to the Soviet era, when all literary organizations were absorbed into a union supervised by the government. The objective was to ensure that contemporary and older literary work for public consumption would not contravene Communist ideals. Nowadays, the organization’s goals resemble those of writers’ unions in most any other country.