Top-level talks between Tajikistan and Belarus 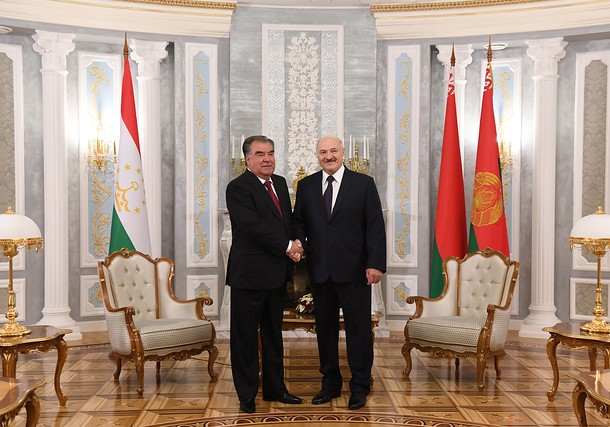 The consultations were preceded by an official welcoming ceremony.  Current issues of the Tajikistan-Belarusian bilateral cooperation were discussed at the meeting in a restricted format. Following the talks, consultations were held with the participation of the delegations.

President Emomali Rahmon expressed his gratitude to President Lukashenko for the warm and sincere welcome and both counterparts called the meeting an important opportunity to discuss the current state and prospects of Tajik – Belarusian cooperation in all areas.

“Tajikistan highly appreciates the friendly relations and mutual support with the Republic of Belarus, which has already acquired the character of a strategic partnership,” said President Emomali Rahmon.

During the talks that took place in the atmosphere of friendship, the parties expressed readiness to strengthen the high-level political dialogue, to boost trade, economic cultural and humanitarian relationship between the countries and reaffirmed their readiness to expand cooperation between the regions and the economic entities of Tajikistan and Belarus.

It was noted that effective goal setting is necessary to make active use of the structure of the intergovernmental commission on trade and economic cooperation.

The sides expressed satisfaction with the level of development of ties in the industry, in particular, with the creation of the Belarusian enterprise Agrotechservice in Hisor for the assembly of Belarusian agricultural machinery, and the establishment of a workshop for the production of dairy products in Dushanbe.

The sides exchanged views on strengthening cooperation in the fields of plant growing, seed production, as well as dairy and meat and poultry production, increasing the export of dried and fresh fruits to Belarus and other areas that are mutually beneficial for both parties.

The meeting also focused on other important issues that relate to the cultural and humanitarian sphere, education, health care, tourism, cooperation between higher educational institutions of Tajikistan and Belarus, reconstruction of transportation parks in Dushanbe, and the acquisition of trolleybuses produced in Belarus.

The close and fruitful cooperation of the two countries within the framework of regional and international organizations, such as the UN, OSCE, CIS and CSTO, was also touched upon.

During the discussion of global security issues, the sides discussed strengthening cooperation in the fight against modern threats and dangers, such as terrorism, extremism, radicalism, organized transnational crime, drug trafficking and cyber crime.

Signing ceremony of new cooperation agreements between Tajikistan and Belarus