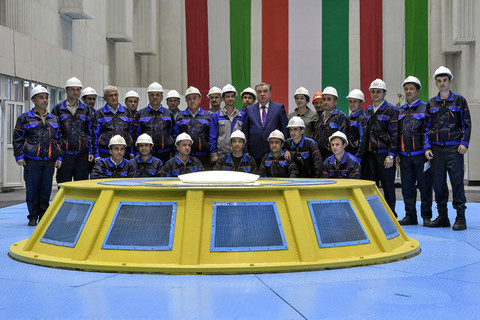 ROGHUN (TAJIKISTAN), Sept 9 (Bernama) — Tajikistan on Monday was not merely celebrating its 28th year of independence following the collapse of the Union of Soviet Socialist Republics (USSR) in 1991, but also the launch of the second turbine of the Rogun dam, a major hydropower plant (HPP) project aimed at solving domestic power shortage woes and the export of energy to neighbouring countries.

The national day celebration was marked by a marching parade, but at the same time the people of Tajikistan were also focused on the launching ceremony of the turbine that brings with it much hope in overcoming the country’s electricity shortage problems, especially during the winter, and to spur its economy.

The historic event was aired live on all of Tajikistan’s television stations.

Tajikistan President Emomali Rahmon officiated the launch of the ‘Unit 5’ turbine in the presence of government officials and foreign dignitaries.

“The day is not far off when the life of citizens of independent and sovereign Tajikistan will improve many times over and the economic capacity of the Tajik State shall strengthen and increase tangibly.

“Implementation of a series of important projects on energy confirms this statement and they will promote improvement of public living standards,” he said at the launching ceremony on Monday.

After the full commissioning of the power station, Rahmon said, it was possible to create dozens of small and large industrial enterprises and to create thousands of new jobs.

The 3,600 MW output will double Tajikistan’s current electricity production, not only solving the country’s electricity shortage during winter, but provide enough for export to South Asia via the CASA-1000 project.

Apart from that, the dam is expected to reach a height of 335 meters when completed, beating China’s Jinping-I Dam which was opened in 2013 and at 305 meters is the world’s tallest dam.

The Rogun dam is located in the upper reaches of the Vakhsh River in the Pamir Mountains, about 100 kilometres from the capital of Dushanbe.

The project is expected to cost about US$3.9 billion and is scheduled for completion in 2028.

“Rogun HPP is the creation offspring of our beloved Motherland’s independence and freedom.

“Commissioning its second unit on the day of celebration of our independence is the most precious present to the noble people of Tajikistan,” Rahmon said to loud cheers from the people waving their national flag proudly.

The dam’s history stretches back to 1976, when initial construction began, and was stalled for four decades due to various factors, before resuming construction in 2016.

Strengthening cooperation between Tajikistan and Malaysia in the field of health