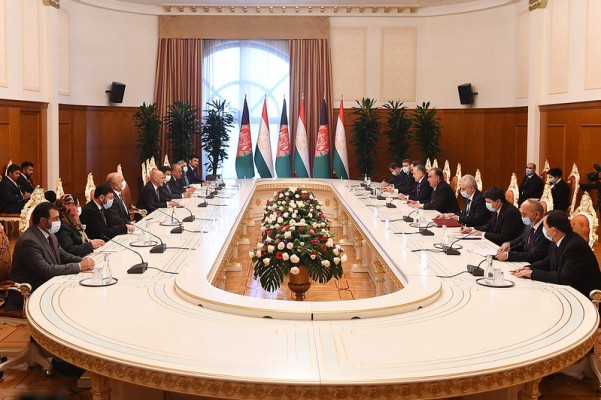 DUSHANBE, 29.03.2021 (NIAT Khovar) – In Palace of the Nation, the Founder of Peace and National Unity, Leader of the Nation, President of the Republic of Tajikistan Emomali Rahmon held talks with the President of the Islamic Republic of Afghanistan Mohammed Ashraf Ghani, who arrived in Dushanbe on an official visit and to take part in the 9th Ministerial Conference Heart of Asia-Istanbul Process.

An official welcoming ceremony and introduction of members of the two delegations was held before the talks. The counterparts met in a restricted format before continuing talks with the participation of their respective delegations.

The discussion focused on the current state and prospects for developing relations at the bilateral level and within the framework of international organizations.

President Rahmon emphasized that cooperation with Afghanistan is one of priority areas of Tajikistan’s foreign policy. Both officials reaffirmed their commitment to further expand and strengthen political contacts and inter-parliamentary ties. They also noted the importance of economy, trade, energy, transportation, and agriculture as promising areas for the development and expansion of cooperation.

President Rahmon proposed to set up the Tajik-Afghan Working Council to increase the volume of bilateral trade, which has decreased due to the pandemic.

The Tajik side also proposed to build new transport corridors between the two countries in order to implement mutually beneficial regional projects. In connection with the current situation, the stepping up of the Intergovernmental Commission on Economic, Trade, Social and Technical Affairs was also noted.

Every year the government of Tajikistan allocates 50 scholarships for the education of Afghan citizens in higher education institutions of the country. In total, more than 500 Afghan students are currently studying in Tajik universities.

The two sides expressed satisfaction over the current state of affairs between law enforcement, defense and intelligence agencies of the two countries. Regarding cooperation in combating extremism and terrorism, the parties noted the necessity of setting up a joint commission for security and border control cooperation.

President Rahmon stressed that Tajikistan supports the efforts of the Afghan government to ensure security, restoring peace and stability in Afghanistan.

President Rahmon expressed confidence that the Ministerial Conference Heart of Asia-Istanbul Process will make a valuable contribution to the process of restoring peace in Afghanistan and its economic progress.

Following the talks the President Rahmon and President Ghani signed a joint declaration. The following new cooperation documents were signed in the presence of both state leaders:

A plan of practical measures — roadmap for cooperation between Tajikistan and Afghanistan in the fields of politics, security, commerce, transportation, transit, energy and culture.

A plan of actions in the framework of the agreement on cooperation between the interior ministries of Tajikistan and Afghanistan in combating terrorism, organized crime and drug in 2021-2022.

Agreement on cooperation between the Committee on Terminology and Language of Tajikistan and the Academy of Sciences of Afghanistan in the field of terminology and language.

A memorandum of understanding on cooperation between the Accounts Chamber of Tajikistan and the Supreme Audit Office of Afghanistan in the field of public sector audit.

An agreement on establishment of the Working Council between the Chamber of Commerce and Industry of Tajikistan and Afghanistan’s Chamber of Industries and Mines.

Meeting of the Ambassador with H. E Austen Zecha-Co-Founder/President and CEO of ISC

President Emomali Rahmon: We Will Never Forget This