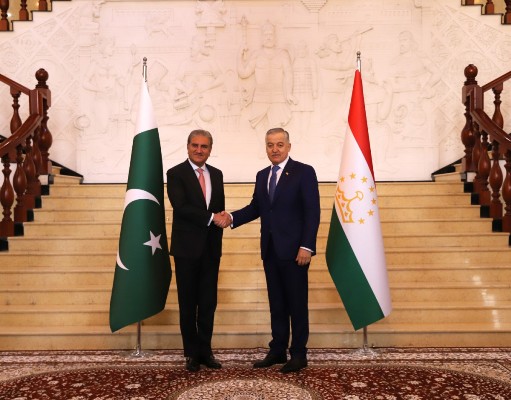 DUSHANBE, 31.03.2021 (NIAT Khovar) – Today, the Ministry of Foreign Affairs of Tajikistan Sirojiddin Muhriddin met with his Pakistani counterpart Mahdoom Shah Mahmood Qureshi, who is on an official visit in Dushanbe.

The ministers discussed the implementation of agreements reached during high-level visits, the signing of new bilateral documents, coordination of joint activities in various formats, including within the framework of meetings of the Joint Commission on Trade and Economic Cooperation, as well as ministerial political consultations.

The parties stressed the importance of expanding trade, economic, investment and scientific and technical ties between the two countries, strengthening inter-parliamentary ties, revitalization of culture and tourism spheres, as well as cooperation in industry and energy, including the continuation of carrying out the CASA-1000 project.

They also discussed the issues of expanding and strengthening the legal base of bilateral relations.

The ministers stressed that the two countries are partners in the fight against global threats — terrorism, extremism, drug trafficking and other forms of transnational organized crime.

It was noted that the holding of the Heart of Asia — Istanbul Process Ninth Ministerial Conference, which took place in Dushanbe on  March 30, will contribute to advancing the peace process in Afghanistan and expanding its cooperation with the countries of the Process.