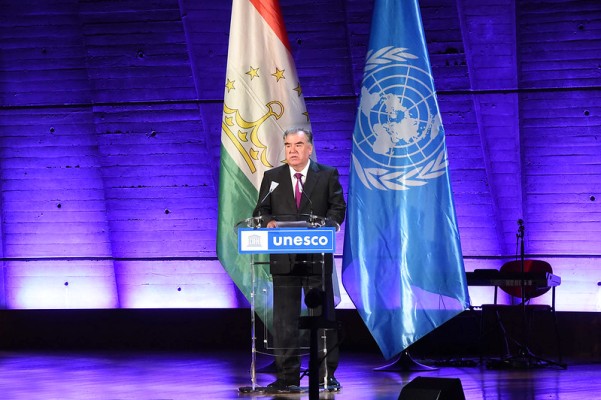 At the outset, I would like to thank your Excellency Ms Audrey Azoulay and all UNESCO officials for their assistance in organising the Republic of Tajikistan Culture Days and Exhibition of Folk Crafts at a high level at the Organization’s headquarters.

As a sovereign state and an equal member of the international community, Tajikistan this year has celebrated the 30th anniversary of its State independence.

During this short period of history, our country has made significant achievements in domestic and foreign policy and has gained a stable position in the international arena.

Tajikistan’s membership in the United Nations and its Educational, Scientific and Cultural Organization (UNESCO) is a case in point.

At the same time, we fully support the implementation of projects that make a significant contribution to the development of education and science, safeguarding of the country’s tangible and intangible cultural heritage for future generations.

During the cooperation between Tajikistan and this influential organisation, reliable relations have been established.

This will allow us to develop coordinated bilateral cooperation in all areas of interest.

It is very symbolic that today we meet again in this historic building, which embodies peace, science, education, culture and creativity with activists, representatives of the society, scientists and creative minds of France.

It should be noted that in 2005 we held the Culture Days of our country in this very palace.

In particular, I would like to mention the Tajik Art Exhibition entitled “Tajikistan, the land of golden rivers.”

We, together with the President of the French Republic Emmanuel Macron, yesterday opened this exhibition at the Guimet National Museum of Asian Art in Paris.

As part of the exhibition, which will be held for the first time in Europe and will last for three months, about 300 monuments from the antiquity of the Tajik people to the present day have been collected.

The exhibition also features valuable artifacts from the history of our ancestors from the British Museum, known as the “Amu Darya Treasure”.

Holding a series of cultural events yesterday and today in the city of Paris, the cultural centre of Europe is an important and memorable event for us.

It is very symbolic that they coincide with the celebration of the 30th anniversary of State independence of the Republic of Tajikistan.

Of course, the period of the new Tajik statehood is not so long in comparison with the more than six thousand-year history of the ancient Tajik people and its traditions of patriotism and civilization.

But it is important for our honourable people that this period is a stage of historical test, improvement of national self-awareness, protection of borders and the existence of the state and nation in general, ensuring peace, stability and revival of national statehood.

In modern times, especially in an environment where the clash of civilizations and different cultural values ​​is intensifying, in-depth study of history and the promotion of a rich historical and cultural heritage is one of the ways to cultivate tolerance.

Indeed, the ancient history of the Tajik people and the valuable material and spiritual heritage of our ancestors, including historical monuments is the greatest school of self-knowledge for every member of society, especially adolescents and young people.

Our people, from ancient times to the present day, cherish their national customs and traditions and ancestral values, and constantly strive to revive and enrich them and to expand their ancient rituals and celebrations among the public.

Despite many difficulties and obstacles, the culture of librarianship and the promotion of science and culture has developed among our ancestors, which is an indisputable proof of this statement.

The nature monument “National Park of Tajikistan”, the ancient city of Sarazm, the national music “Shashmaqom”, the International Day of Navruz, the national dish “Oshi Palov” and “Chakan, the art of embroidery in the Republic of Tajikistan” are outstanding examples of the rich cultural and historical heritage of the Tajik people, recognised by UNESCO and included in the World Heritage List.

The period of the Samanid’s statehood, which coincides with the full formation of the Tajik people is unique in human civilization.

It should be noted that the scientific, literary, cultural and historical heritage of this time is recognized as a unique achievement of mankind and is known among the world for its content and scientific and literary value.

During the Samanids, the Tajiks became the owners of Devon (the State Chancellery) and Daftar (the office), the emblem, the flag, and well organised structure of State administration, science, education, culture, literature and profession flourished.

Libraries, madrassas, palaces, shops, markets, and handicraft halls were built in the largest cities of that time.

During this period, several festivals of national, regional and global significance were included in the list of festivals of this organisation and celebrated in the country and abroad.

In conclusion, I would like to thank all the organizers of this forum.

I hope that the Tajikistan Culture Day will play a worthy role in the presentation of our country in the international arena.

Source of the news:
https://mfa.tj/en/main/view/8913/speech-bythe-president-of-tajikistan-at-the-opening-ceremony-of-the-tajikistan-culture-day-in-unesco 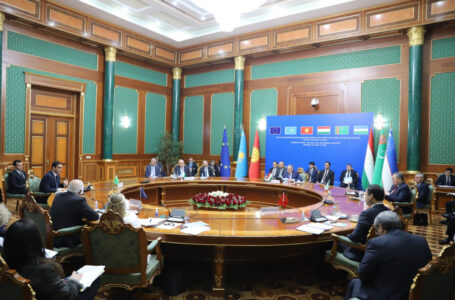