Ancient agricultural settlement Sarazm is located on the left bank of the Zarafshan River, 15 km west of the town of Penjikent, the Republic of Tajikistan, 500 meters north of the Penjikent-Samarkand highway and on a hill extending from west to east for about 1.5 km, a width of 400-900m, the territory of the monument occupies more than 100 hectares. Geographic coordinates are 39 ° 30’28.4 “northern latitude, 67 ° 27’31.4” Eastern longitude, and the average absolute height is 910 m above sea level.

In antiquity, Sarazm had an important strategic location in Central Asia, a contact point between nomadic tribes and the first agrarian settlers of Traxsoxania (the region between Syrdarya and Amu Darya), which was the key to its unique development during the 4th-3rd millennia B.C. Through the organization of trade between these two groups, Sarazm contributed to the improvement of these relations and became more significant locally and regionally. Gradually, Sarazm became the main trading center in Central Asia, which established relations with the settlements of the Eurasian steppe and the Aral Sea in the north, Turkmenistan and the Iranian plateau in the west and the Indus valley in the south. In many ways, this was facilitated by the presence of minerals in the surroundings of Sarazm, making it the first large center for the extraction of copper, tin and lead and other metals in the Central Asian interfluve in the 4th-3rd millennia B.C. Thus, Sarazm becomes the main center for the production of paleometal in the region and develops as a proto-city center. In addition, there were manufactured industrial goods – jewelry and objects made of bronze, lead, silver, gold, steatite and semi-precious stones (turquoise, agate, lapis lazuli). The emergence of more advanced production processes and improved technology has led to many social changes. The beginning of specialization in the production of goods contributed to the emergence of social hierarchies and the completion of urbanization. In addition, the mountainous zone and a wide part of the valley in the vicinity of Sarazm were a favorable zone for farming and raising livestock, and the nearby “tugai” (jungle) in the Zarafshan coastal area also allowed the population to engage in gathering, hunting and fishing.

Due to years of archaeological research in the settlement, there four periods of habitation have been revealed (the Aeneolithic – early Bronze Age). A range of radiocarbon dates performed in the laboratory of the Museum of Peabody, Harvard University.

The terrain of the monument is represented by more than a dozen low mounds between small flat areas. There are no traces of enclosing walls or fortifications. The complex of Sarazm in each of the periods of habitats consists of residential quarters with temples, workshops, and in III period also of palaces. The obtained analyzes of slag from furnaces and numerous metal finds indicate a high level of the mining metallurgical industry in the settlement. Discovered pottery kilns of various designs indicate a high level of technology for firing ceramic dishes. An innovative element in the manufacture of dishes is the appearance in the IV period of the potter’s wheel.

Architecture. In the IV-II millennium B.C. The architects of Sarazm used the “architectural design” system with the methods of geometric harmonization of the plans (and probably the facades) for more monumental construction of the object. This gives evidence of how architectural art penetrated the remote mountainous regions of the ancient East. Already at the earliest stages of the settlement’s existence (mid-4th millennium B.C.) rectangular raw brick (49-50×24-25×11-12 cm) was used in the construction of housing, which allowed for flexibility in the design of architectural elements. The construction also used river pebbles, but only in the last period of habitation and mainly for the construction of the foundations of the walls. Roofs were made of wooden beams, covered with an entanglement of tree branches or reeds, smeared with one or more layers of clay with admixture of adobe on top. For lighting and ventilation of premises, door and window openings were arranged, sometimes with very difficult systems.

Public granary. This monumental building measuring 15×15 meters was built on a platform 0.75 meters high above the outer level and includes twelve rooms. Three of them are long corridors adjoining on both sides, probably also used for storing grain.

Iconic buildings and structures. Starting from period III, “temples” were built separately from residential buildings (for example, in excavations IV, V, IX, XI, XII). The walls of ceremonial buildings were often reinforced with pilasters and counterforts, plastered and decorated with paintings.

The iconic complex of the period of Sarazm-II in excavation IV, consisting of four rooms, two of which are equipped with rectangular altars, are decorated with wall paintings. Stone and alabaster vessels were found in the premises. All this testifies to the special status of this building.

In the excavation of the V period Sarazm-II, a structure consisting of two round rings made of bricks, an outer ring with a diameter of 7.7 m, and an inner ring – 4.25 m have been preserved. It is possible that this structure represented the sun.

The excavation of the XI excavated a temple complex of the Sarazm-II period, which had a central room with bypass corridors. The open hearth in the center of the room and the remains of the charred bones of animals near the northern wall make it possible to classify this room as a venue for the ceremony with a sacrifice. On the east side of the temple adjoins the well depth of 27 m, the water from which was used for the needs of the temple.

In excavation XII, round hearth altars, which may have been used for ritual purposes, were found in the center of the premises of the Sarazm II period. For example, in various ethnographic studies in the headwaters of the Zarafshan valley, certain rituals are mentioned associated with fire inside the living space. Since the period of Sarazm-III, along with round altars, hearths, square forms have been used. According to the charred seeds found in the altar-hearth, they probably also had a household function.

Household facilities. These include a two-tier pottery kiln dating from the end of the 4th millennium B.C. The combustion chamber had a complex system of firing channels (diameter 3.32 m), indicating a high development of ceramic production in Sarazm.

Material culture. Received numerous artefacts of excellent quality made from ceramics, metal, stone and animal bones. Ceramic objects are represented by kitchen and tableware, decorated with geometric patterns in the form of crosses, triangles, squares, nets and wavy lines, painted with black and red colors. A unique feature of Sarazm is that it has found colored ceramics that has analogies in the south of Turkmenistan, eastern Iran, in Baluchistan, southern Afghanistan, Seistan, Khorezm (Keltminar culture).

Metal finds (150 exemplars): bronze axes, tesla axes, arrowheads and spears, knives, pins, needles; lead ingots (possibly for export), lead seals; silver and gold jewellery. Tools for the production and processing of metal products constitute 15.63% of the total number of guns. The significant number for the expansion of metal sheets and foil – 9.30%, various types of levelling hammers – 7.97%, molds for the manufacture of metal decorations – 9.30%. The Sarasmites used a cold and warm method of processing, levelling the foil, removing rough edges, correcting the blades and other operations. Thus, the large-scale production and variety of metal products and tools for metal processing demonstrate a high technical and technological level of Sarazm artisans and the specialized nature of the craft.

Stone products. In terms of quantity, this group ranks first (13.17% of the total number of tools): marble cups and goblets, bottles, tops of maces, spinner, tools for processing grain, leather and wood, arrowheads, counterweights, weights, beads, scrapes, scrapers, chisels, adzes, debarker, cutters, sawings and other items. For the production of small jewellery, master applied form, anvil platform, hammers for light operations, hammers for smoothing and abrasives. An important find is a cylindrical seal depicting a bull, indicating a connection between Sarazm and Proto-Elam centers such as Shahri Soht, Sialk, Tepe Yahya and Susa in Iran. Thousands of beads made from pasta were found on the woman’s dress in grave 5 in excavation IV.

Products made of bone: awls, needles that were used for sewing clothes, knitting, etc.

Products from clay: woman figurine. All these findings prove that Sarazm, as early as the middle and end of the fourth millennium B.C., was the proto-city center not only a supplier of goods to its distant neighbours but also supplied with the industrial goods its own population.

Agriculture. Cultivated cereals, large stocks of charred grain found in excavation III, a huge number of various stone tools for processing grain (sickles, grain graters, stupas and pestles) testify to the high efficiency of agriculture, which played a significant role in the economy of Sarazm. From the tillage tools found hoe.

Livestock. Osteological findings (5684 bone fragments of which 1609 are identifiable) are the main sources of data on animal husbandry in Sarazm, studied by Gene Dess and A. K. Kasparov. The bones of small cattle predominate significantly – more than 87%. They are dominated by sheep (20.19%) and goat (12%). The number of cattle residues is only 10.1%, and the dogs 0.69%. Wild animals include the remains of sheep, wild bull, hog, and gazelle bones.

Metallurgy. In the upper reaches of the valley of the Zaravshan River, more than 30 open metal sites have been identified. Analysis of metallurgical samples was performed in the laboratory of Harvard University’s Peabody Museum. Elemental analysis of metal objects from different periods of habitation of a settlement shows that they are made of metals of different ores but mined in the same area. Ore was mined with heavy two-handed hammers.

Production of paints. Mineral paints were traced on the instruments and on the interior surfaces of the rooms. When applied to the surface of ceramics, mostly red, yellow, brown and black colors were used. The manufacture of paints was massive and required several tools: paint grinders, paint pestles for grinding and rubbing, chimes for grinding, mortars, etc.

Therefore, at the turn of the IV-III millennia BC Sarazm has become a prosperous proto-urban center, an important point of interregional exchanges (especially based on the export of tin). The settlement became the main crossroads, on the one hand, between east and west, and on the other – north and south. Here a culture developed with a complex organization, as evidenced by the monumentality of the structures and their interior.

The exchange of cultural skills with remote areas in the Middle East (Mesopotamia, Elam, Khorasan, Sistan and Baluchistan), southern Turkmenistan, and the north-east of the Indian subcontinent was carried out either directly by importing pottery, or through intermediaries.

In 2001, the preserved part of the settlement of Sarazm was declared a national treasure. By the Decision of the Government of the Republic of Tajikistan under No. 198 and with the certificate of land No. 006981, issued on April 19, 2001, a plot of land in Sarazm in the amount of 47.34 hectares is the inviolable property of the Republic of Tajikistan. 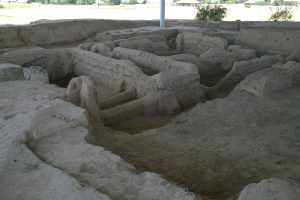 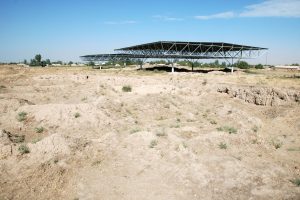 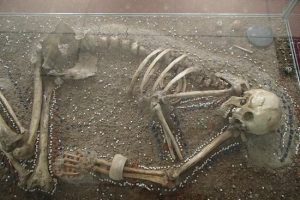 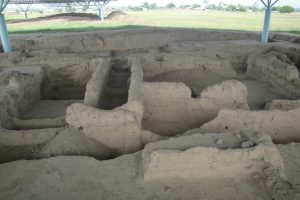 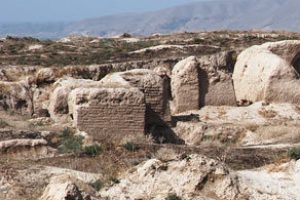 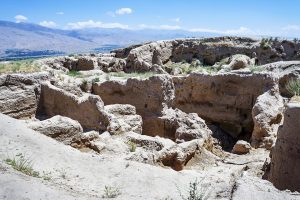