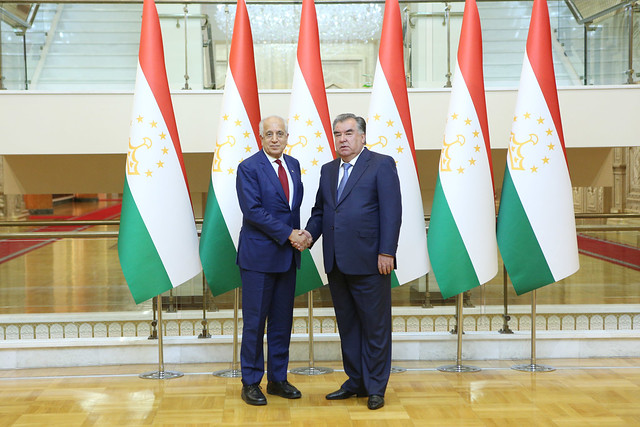 DUSHANBE, 27.06.2019. (NIAT Khovar) – On June 27, the Founder of Peace and National Unity, Leader of the Nation, President of Tajikistan Emomali Rahmon received the United States Special Representative for Afghanistan Reconciliation Zalmay Khalilzad. The meeting took place at the Palace of the Nation.

The current state and prospects of cooperation between Tajikistan and the US was the main subject of the discussion.

President Rahmon expressed his confidence about the joint effort of the relavant states toward ensuring stability, peace and progress in Afghanistan. Khalilzad praised Tajikistan’s role and contribution toward supporting Afghanistan’s security and stability and that of the Central Asian region, and on behalf of the US administration thanked President Rahmon for his initiatives and creative efforts.

During the conversation, the sides paid special attention to the issues of further strengthening the protection of the Tajik-Afghan border, and applying consistent effort in jointly combating the threats of modern times, especially terrorism, extremism, radicalism, and illicit drug trafficking.

Top-level talks between Tajikistan and Belarus