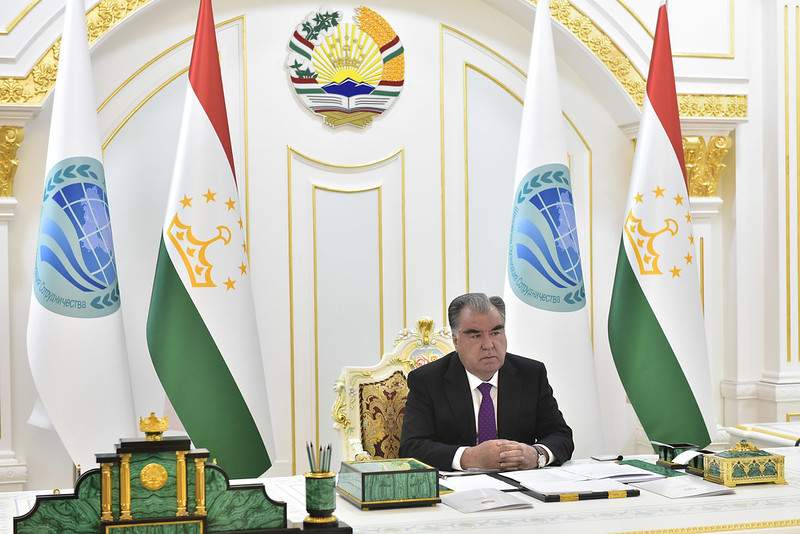 DUSHANBE, 10.11.2020 (NIAT Khovar) – The Founder of Peace and National Unity, Leader of the Nation, President of Tajikistan Emomali Rahmon took part in a​ summit of​ the​ Shanghai Cooperation Organisation Council of​ Heads of​ State hosted via video link by Russia.

The​ meeting participants discussed prospects for​ developing cooperation within the​ SCO and​ topical issues on​ the​ international and​ regional agendas.

In his remarks, President Rahmon noted the measures taken by Russia during its SCO presidency and stressed that during its own presidency in 2021 Tajikistan will take all the necessary measures for the planned events that year, in particular the SCO jubilee summit scheduled to be held in Dushanbe.

While delivering his speech about the negative impact of the pandemic on the economies of countries in the region and the world, President Rahmon stressed the need to develop interstate cooperation focusing on trade, finance, industry, energy, transportation, banking, science, education, health care, culture and tourism.

He also drew the attention of the heads of SCO member nations to the importance of cooperation in the fight against terrorism, extremism, drug trafficking, cybercrime and​ other forms of​ transnational organized crime, as well as the necessity of promoting the implementation of Tajikistan’s initiatives on​ water and ecology-related​ issues.

Taking into account the​ growing threat of illicit drug trafficking as one of the main sources of financing of terrorism and extremism, and the increase in natural disasters due to climate change and human impact on nature, President Rahmon noted the steps taken by the Tajik government to establish in Dushanbe a SCO Permanent Anti-Drug Center and the International Glacier Protection Fund within the framework of the Global Water Agenda, and called on Tajikistan’s partners to support them.

He also expressed useful views on providing assistance for promoting peace, stability and socio-economic development of Afghanistan, as well as strengthening integration with influential international organizations, such as the UN.

Following the session, a​ series of​ documents related to further expansion of cooperation between SCO member nations was adopted, including the​ Moscow Declaration of​ the​ SCO Heads of​ State Council.

In closing, the presidency in SCO was passed from the Russian Federation to Tajikistan. A jubilee meeting of the SCO Council of​ Heads of​ State, which coincides with the 20th anniversary of the organization, will be held in 2021 in Dushanbe.