Meeting of the Government of Tajikistan 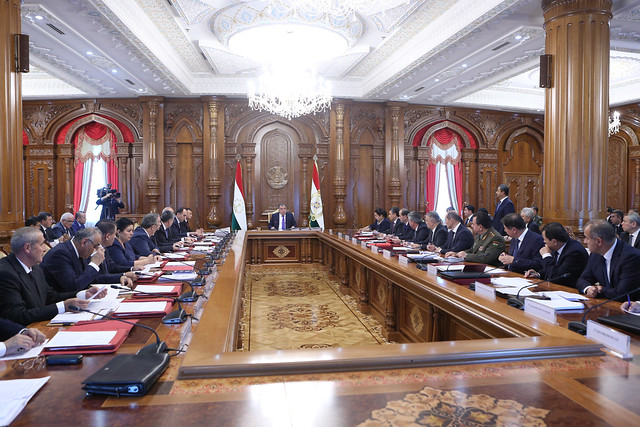 The Minister of Energy and Water Resources Usmonali Usmonzoda reported on the implementation of the Government Resolution No. 302 On State Support and Measures to Improve the Financial and Economic Condition of the Open Joint Stock Holding Company Barqi Tojik from May 3, 2014.

Usmonzoda noted that in 2018, the production of electricity reached 19.7 billion kWh. Due to the measures taken to reduce electrical energy losses in the period 2014-2018, power losses decreased from 17.3 percent in 2014 to 15.5 percent in 2018. During this period, electrical efficiency in the domestic market increased and the collected payments increased two fold from 1.04 billion somoni in 2014 to nearly 2.08 billion somoni in 2018.

Other subjects on the agenda included reports of the Education and Sciences Minister Nuriddin Said titled “On the State Program for the Development of Pre-School Education in the Republic of Tajikistan for 2020–2025,” and went over the draft laws “On Amendments to the Law of the Republic of Tajikistan On the State Budget for 2019,” and “On the Treasury.” The amendments to the Tax Code was discussed by the Finance Minister Fayziddin Qahhorzoda, while the Chairman of National Bank Jamshed Nurmuhammadzod reported on the law “On the National Bank of Tajikistan,” and the General Prosecutor Yusuf Rahmon informed about the law “On Countering Extremism.”

Following the discussion, the bills were submitted to the Assembly of Representatives for consideration.

Other discussed subjects included inter-governmental agreements between Tajikistan and other countries.

The Minister of Health and Social Protection of the Population Nasim Olimzoda delivered a report on the “State Program to Improve Reproductive Health through 2022.” The head of the Antimonopoly Service Ikromiddin Valizoda informed about the “Electric Tariffs and Heating and the Electricity Tariff Calculation Methodology in the Republic of Tajikistan.” The Chairman of the city of Rogun Muzaffar Sulaymonzoda reported on the general plan for the city.

At the end of the meeting, President Emomali Rahmon gave specific instructions to the responsible officials for the timely fulfillment of tasks set at the meeting and the implementation of the preparation works for the 30th anniversary of state independence, as well as reforestation to strengthen coastal protection, organizing quality recreation for children and adolescents in holiday camps, and comprehensive preparation for celebration of important dates.

In closing, President Emomali Rahmon touched upon the result of the summit of the Conference on Interaction and Confidence-Building Measures in Asia (CICA) that took place in Dushanbe on June 15 and thanked the leadership of the city of Dushanbe and all its structures for holding and organizing the international event.

Kokhi Navruz Included in the List of Eight SCO Wonders