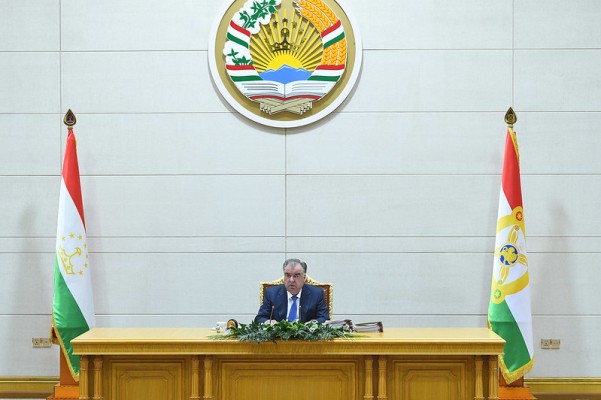 DUSHANBE, 27.10.2020 (NIAT Khovar) –    The Founder of Peace and National Unity, Leader of the Nation, President of Tajikistan Emomali Rahmon presided over a session of the government.

Share of total expenditure of state budget is expected to be 28.1 billion in 2021. Despite the impact of internal and external factors on the national economy and the significant drop in state revenues this year, the government has increased salaries, pensions, and stipends from September 1, 2020.

Despite the impact of internal and external factors on the national economy and expenditure budget definition due to the socio-economic impacts of the COVID-19 pandemic, the government is expecting an increase in the volume of funding in other sectors in 2021.

President Rahmon issued instructions to the ministries and relevant government agencies, executive bodies of state authorities regarding fulfillment of Tajikistan’s main macroeconomic indicators in the medium-term perspective, the indicators of state budget of Tajikistan for 2020 and its forecast income for 2022-2023, as well as anti-crisis programs and plans.

It should be worth noting that the Medium Term National Budget Planning aims to  implement strategically important state priorities, including breaking in the communication deadlock, achieving energy independence, ensuring food security, social protection and national security, and industrialization of the country.

The meeting participants also discussed a number of other issues. In part, the Mayor of Kulob Valizoda Abdukodir spoke about the implementation of the Resolution of the Government of Tajikistan dated December 31, 2014 about the Program of Social and Economic Development of Kulob for 2015-2019.

The program implemented in the city so far are worth 578 million somoni in sectors of the economy, industry, agriculture, social protection of population, education, culture, healthcare, public utilities for drinking water supply, emergencies and resource provisions.

During the implementation of the program, 17 enterprises and workshops have been built and put into operation. Fourteen projects worth 6.9 million somoni are aimed at ensuring social welfare.

During the implementation of the program in all sectors of the national economy 14,742 new permanent and seasonal jobs have been created.

Other issues discussed included a number of bills, such as the draft laws on making changes and attenda to the law of the Republic of Tajikistan On State Registration of Acts of Civil Status, On Consumer Rights Protection, On Medicine and Pharmaceutical Activities, and On Land Management.

At the end of the meeting, President Rahmon called for the timely fulfillment of the set tasks and instructed government members to eliminate shortcomings.

President Rahmon Listed Among 500 Most Influential Muslims in 2020