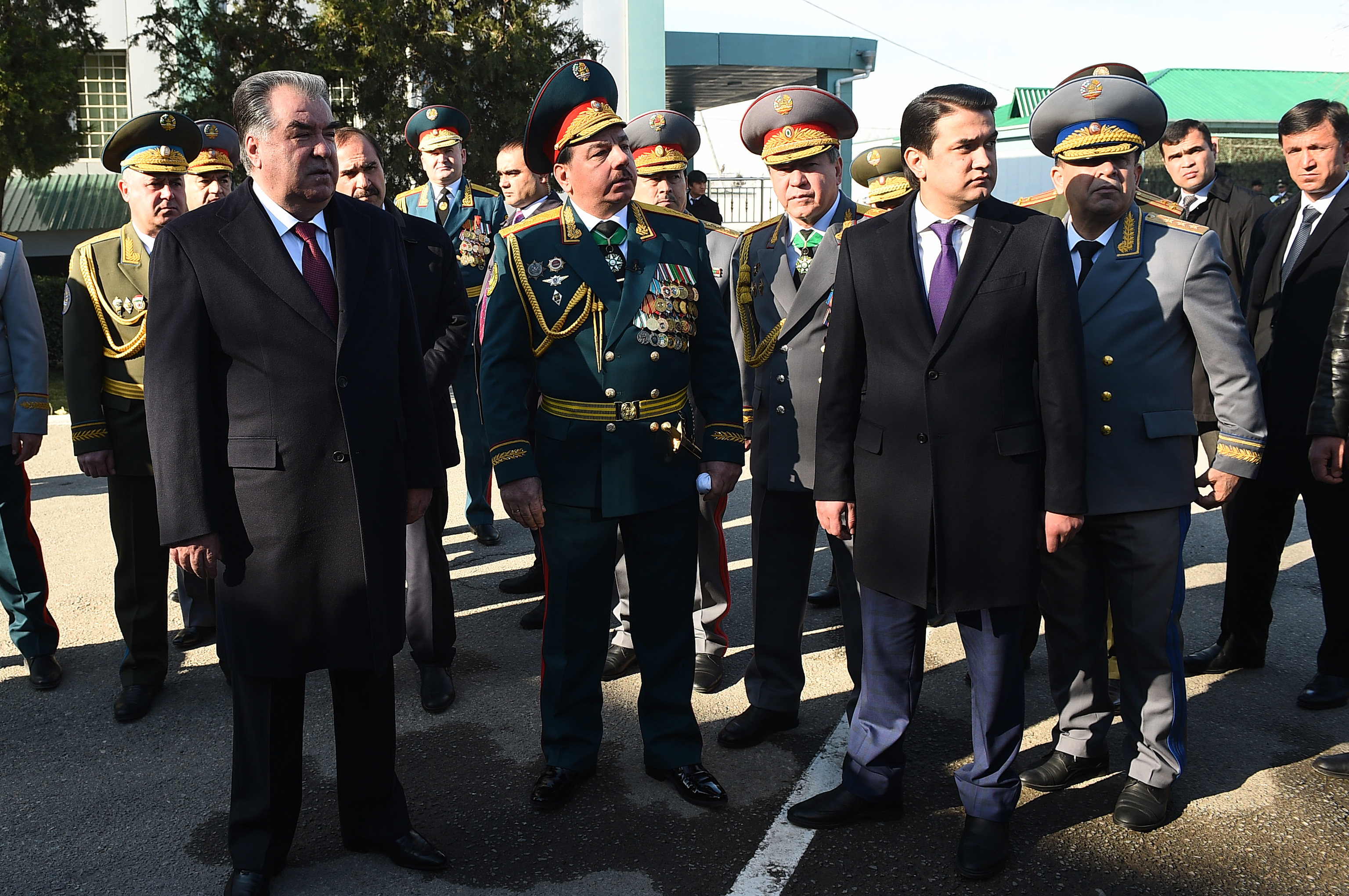 The Founder of Peace and National Unity, Leader of the Nation, President of Tajikistan Emomali Rahmon attended a military parade commemorating the 27th anniversary of the founding of the Armed Forces of Tajikistan.

Dushanbe Chairman Rustam Emomali and Defense Minister, Colonel General Sherali Mirzo were among those in attendance.  Over 8,000 military personnel of Dushanbe garrison marched through the National Guard Base. Before his address, President of Tajikistan Emomali Rahmon got acquainted with a set of different weapons, ammunition and equipment.

Below is his delivered speech during the event:

Comrades, generals, officers and valiant soldiers of the motherland!

The Day of the Armed Forces of Tajikistan is an expression of independence and sovereignty, the strong will of our people. Courage, steadfastness and patriotism is celebrated throughout the country with a sense of high national pride.

On this occasion, I sincerely and wholeheartedly congratulate the personnel of the Armed Forces and law enforcement officials. I wish all the faithful defenders of the Motherland good health, prosperity and success in carrying out their responsible tasks.

Twenty-seven years ago, when the young Tajik state took its first steps towards creating independent statehood, the National Army was formed as one of its most important pillars of statehood, i.e. the formation of the National Army took place in a very difficult period of our newest national statehood.

Despite the incredible difficulties of those days, the government directed all its efforts toward providing the necessary conditions for service and a decent life of the personnel of the newly formed army.

While forming the National Army during the civil war, brave officers and soldiers have remained faithful to their military oath and made a huge contribution to the restoration of the constitutional order, protection of territorial integrity and state independence, the cessation of bloodshed, ensuring peace, stability, national unity, and peaceful life for Tajiks.

Thousands of proud, patriotic and loyal officers and soldiers laid down their lives on this path. Their memories will live forever in the heart of the people of Tajikistan.

Within the structure of the Armed Force, we have formed the Ground Forces, Air and Air Defense Forces, Mobile Forces and have started the establishment of the Border, Internal Troops, National Guard and other military structures.

Today, representatives of the aforementioned military units and other power units have lined up for the military parade, which is a matter of pride and a guarantee of peace and stability for every citizen.

Over the past years, tens of thousands of patriotic youths have passed this school of courage and perseverance, that is, they served in the Armed Forces, thereby fulfilling the sacred filial and civic duty. They have repeatedly proved that our national army can, with honor, protect national interests, shrines of an independent state and ensure the security of the state and society.

Dear officers and soldiers of the Armed Forces!

Contemporary regional and world issues in recent years have led to the killing of thousands of innocent people and causing millions of them to become either displaced or homeless. This has encouraged us to continue to take the necessary measures to strengthen the material and technical basis of our military units and bringing them in line with the specifics of modern threats and dangers, increasing the level of combat readiness of their personnel.

Rapid change and conditions of political and military situation of the world, including in the region, increasing the scope of activities of terrorist and extremist groups and organizations, as well as transnational crimes require from each soldier to be constantly vigilant and ready to defend the independence of our beloved Motherland, to protect the national security, and ensure a peaceful life for the population.

In these circumstances, all military and law enforcement personnel, ranging from an ordinary soldier to high-ranking officers, are obliged to utilize their knowledge, experience, skills and abilities to protect our independence and its achievements and to faithfully service in the interests of the people and the country.

In this process, chiefs of military structures, law enforcement agencies and commanders of military units must work toward the improvement of the professional level of their personnel.

The noble people of sovereign Tajikistan in the face of military servicemen of the country see their glorious and courageous and brave sons, who are always faithful to their military oath, their people, and homeland.

I believe in the high national feeling, resilience and courage of the military personnel of the Armed Forces and proudly and confidently declare that they will continue to serve as a reliable shield that protects our beloved Motherland, its security, stability, guaranteeing peaceful life for all.

Once again, I congratulate all of you on the occasion of the 27th anniversary of the formation of the Armed Forces and wish each of you, the entire military personnel and law enforcement officials, health, happiness, prosperity and to our independent Tajikistan – eternal peace and stability.